Our Chicago store is now open for in-store shopping!

Enter your email address and let us know where to send our super sweet upcoming events.

A Slice of Chicago History

What started in Eli’s humble restaurant kitchen has blossomed into a third generation family-owned bakery, specializing in cheesecake and desserts that can be shipped nationwide and purchased across the country.

We couldn’t be prouder to carry on the traditions of our founder Eli Schulman, by baking up great desserts and following his golden rules: “Charity will never bust you,” and “Treat Others as if you were the other.” It’s an honor to share our family’s treasured cheesecake recipe and other sweet treats with you. We hope you love them as much as we do!

Join us on a historical ride through Eli’s colorful career and ultimate rise to restaurateur and baker extraordinaire!

Eli’s The Place for Steak

A Cheesecake is Born…

A Win For The White Sox 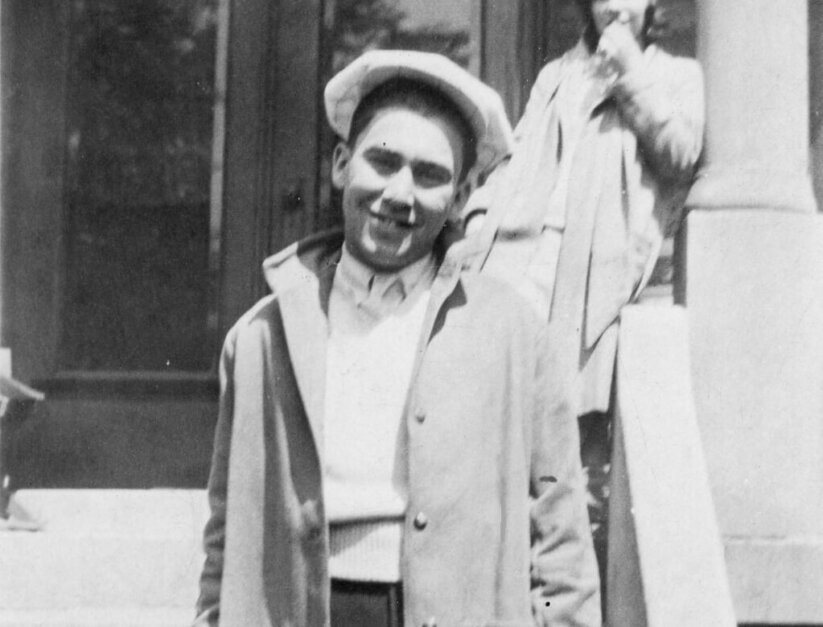 1910 Chicago’s West Side
Eli M. Schulman is born on the West Side of Chicago in the Greater Lawndale area. When Eli is just 16, his father, a baker, passes away, forcing him to drop out of high school and take care of his mother and siblings. He sells newspapers and delivers packages, hawks shoes out of the back of his car on Maxwell Street, and sells scorecards and seat cushions at the ballparks in the summer. Eli’s relentless work ethic and ingenuity sets the tone for what will be a long and successful career in hospitality. 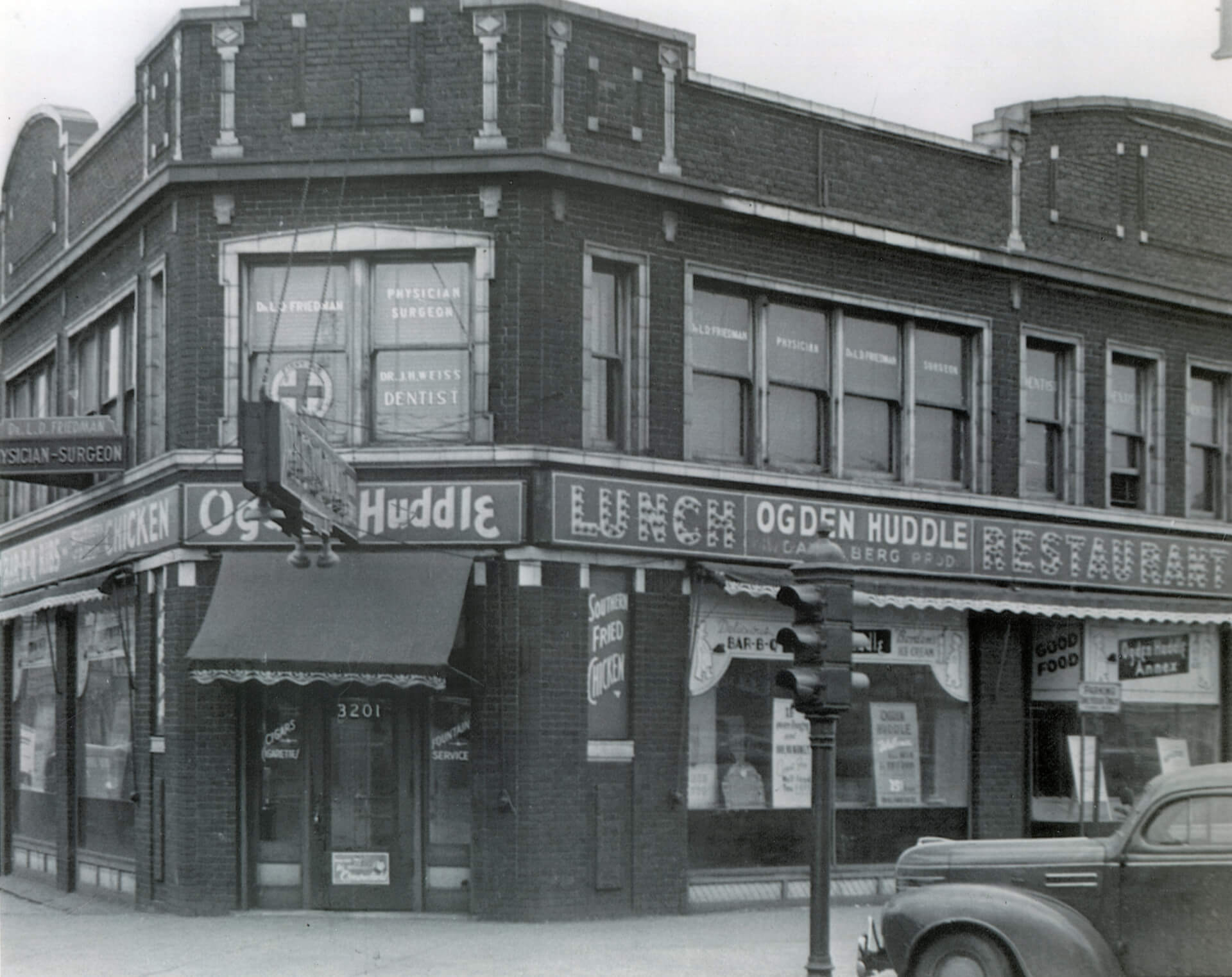 1940 The Ogden Huddle
Eli spies a foreclosure notice on the door of a coffee shop he frequented at Ogden and Kedzie. Inspired, he buys the building and restaurant on the spot and renames it Eli’s Ogden Huddle. It was there that Eli discovers he can cook! On opening day, he finds his cook, passed out drunk. With customers arriving, he has no choice but to take the helm, even resorting to calling his mother to ask for recipes. He does such a good job, that when customers return after he hires a new cook, they say they liked the food better that telling first day. While Eli hones his cooking skills in the Army, his siblings, Nate and Bertha, run The Huddle. 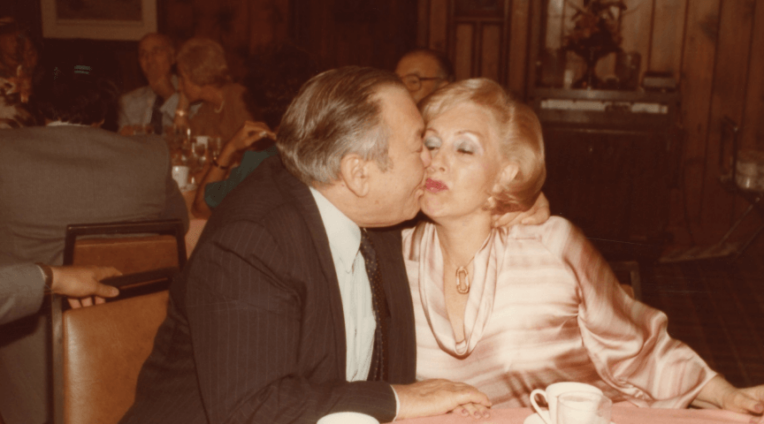 1948 When Eli Met Esther…
After Eli returns from the Army, he marries Esther Nettis, who will work with Eli throughout his career in the restaurant business as his right-hand woman. After World War II, Chicago’s North Side is booming: people are buying houses, having babies, and eating out. Eli joins the mass exodus to the North Side and opens a second Huddle location at Argyle and Sheridan. Nate and Bertha continue to run the West Side Huddle. 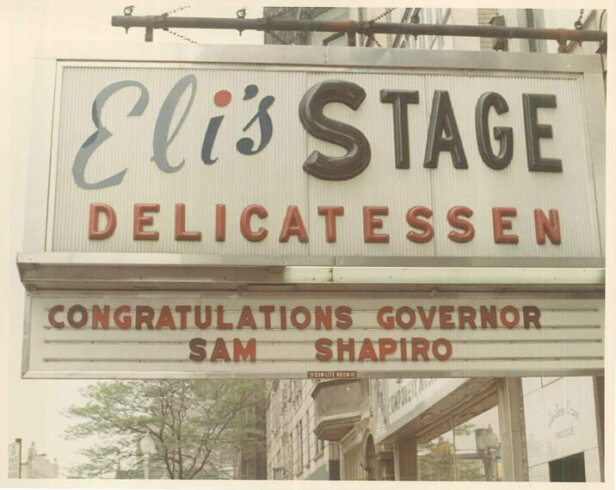 1962 Eli’s Stage Delicatessen
Eli makes his move to the Gold Coast, a mecca for show girls, up and coming entertainers, young professionals and singles looking for a place to hang out. Eli’s corned beef sandwiches and great personality makes the Deli the place to be, attracting local pols, neighborhood regulars, columnists and celebrities appearing at the nightclub, Mr. Kelly’s, located just down the street. 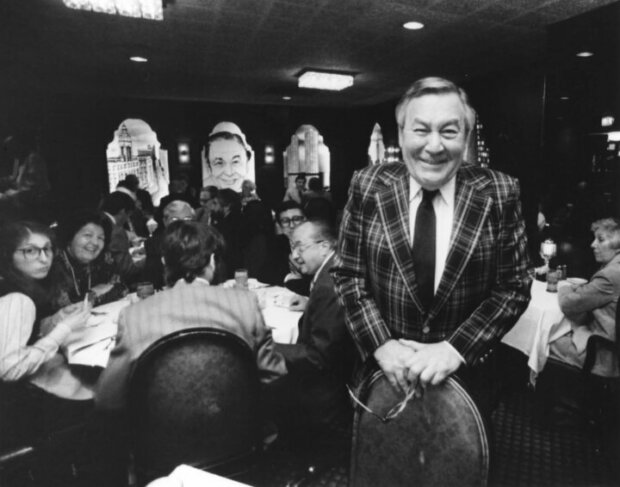 1966 Eli’s The Place for Steak
The Deli was very successful, but Eli had yet another dream: a steakhouse. In 1966, while still running Eli’s Stage Delicatessen, he opened Eli’s The Place For Steak in the Carriage House Hotel, located at 215 E. Chicago Avenue. The Deli’s regulars followed Eli to his new white tablecloth restaurant, where they’d find a mound of chopped liver, vegetable crudités on ice, and a bread basket full of raisin pumpernickel and matzoh on each table. 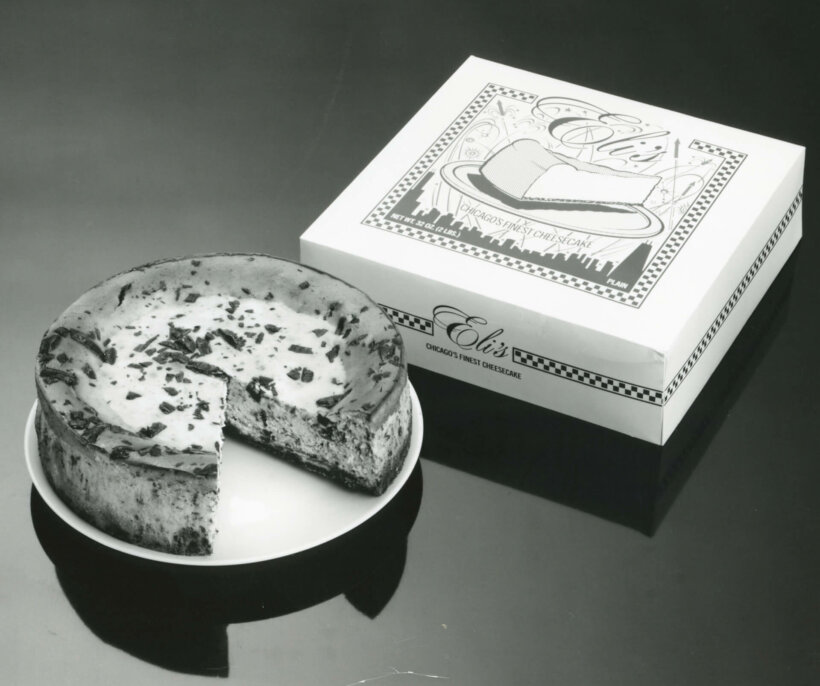 1978 A Cheesecake is Born…
Eli serves various desserts at the steakhouse, including the ice cream snowball with coconut and chocolate sauce, apple strudel, and his least favorite dessert of all – fresh fruit. (He says, “It can look great, but taste like a potato…and that’s the last thing people remember.”) In the late ’70s, he decides that cheesecake will be the signature dessert at Eli’s The Place For Steak. Every day between the lunch and dinner service, he heads to the restaurant’s kitchen to experiment with cheesecake recipes, and serves up test versions to regular customers to get their opinions. After about a year of testing, Eli finalizes four cheesecake recipes: original plain, chocolate chip, cinnamon raisin, and Hawaiian. Eli has no idea that he’s about to change the world of cheesecake forever by creating Chicago-style cheesecake: golden brown on the outside, rich and creamy on the inside, baked on a signature all-butter shortbread cookie crust. 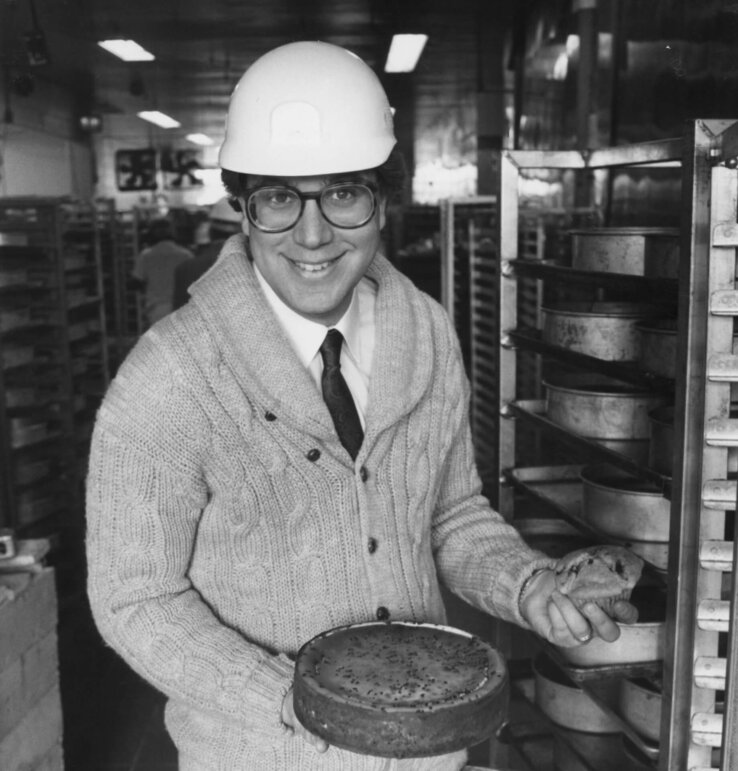 1984 It’s a Family Affair
Marc Schulman, Eli’s son and only child, leaves behind a successful legal career to head up The Eli’s Cheesecake Company, a spinoff of the steakhouse’s treasured dessert. Aside from cheesecake, the restaurant is known for many famous dishes, including Liver Eli, Shrimp Marc and Chicken Vesuvio, to name a few. As Marc said, “I was fortunate that my dad’s greatest creation was his cheesecake, because unfortunately, liver just doesn’t have the same universal appeal.” In the mid-1980s, He opens his first bakery on Chicago’s Northwest side on Dakin Street. 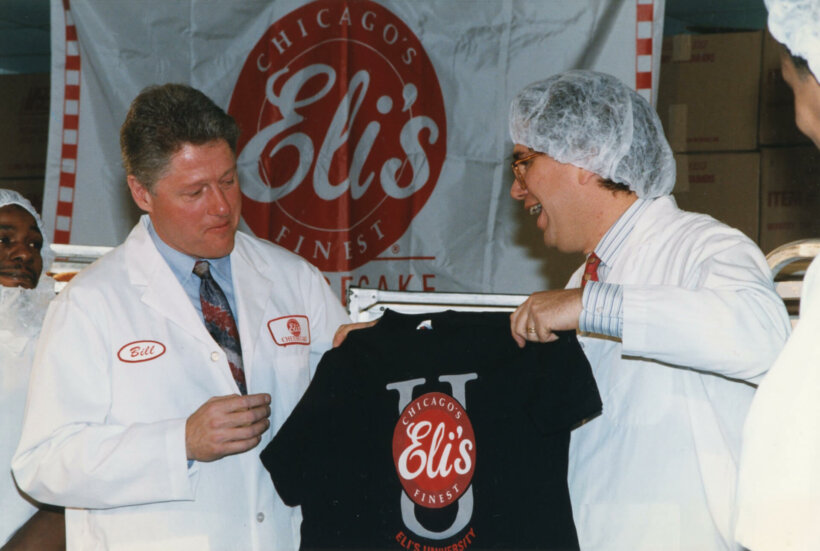 1992 Eli’s U
Marc Schulman believes that empowering Eli’s associates is critical to the success of the business. In the early 1990s, Eli’s partners with Wright College to implement a General Education Development (GED) program at the bakery. Eli’s GED candidates take on-site classes three days per week while their coworkers cover for them. This allows working parents the opportunity to gain a degree and still return home from work in time to be with their families. The day before the 1992 Illinois primary and then-Arkansas Gov. Bill Clinton and Hillary Clinton visit Chicago and make a campaign stop at Eli’s Cheesecake, precisely because of Eli’s innovative education program. Clinton wins Illinois, and we like to think the cheesecake helped! In 1993, Eli’s makes a giant “Red, White and Bill” cheesecake for President Clinton’s inauguration in Washington DC. 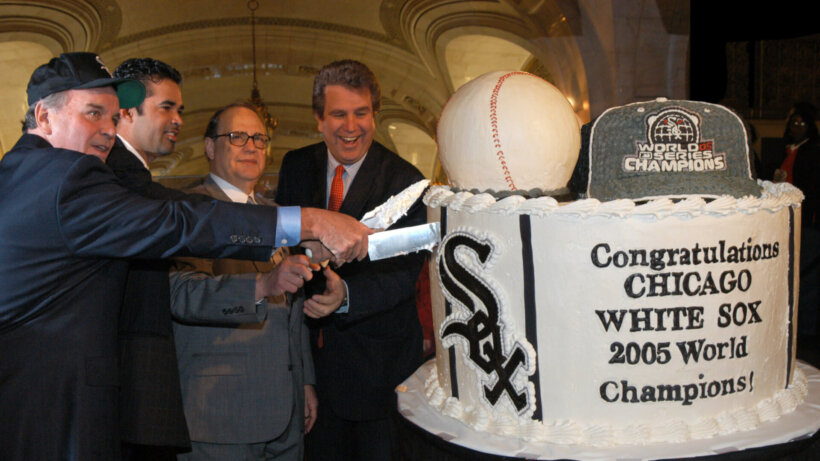 2005 A Win For The White Sox
Eli’s celebrates the White Sox World Series victory with a 500 pound cheesecake, cut by Mayor Richard M. Daley, Jerry Reinsdorf, Ozzie Guillen, and Marc Schulman.
Today Like Father, Like Son, Like Daughter
Elana Schulman, granddaughter of Eli and daughter of Marc, joins the family business and proudly represents the third generation. She says, “I am the luckiest person in the world. I get to carry on my grandfather’s legacy while working and learning from my Dad, the most caring and charitable person I know. And I love cheesecake!” Elana previously worked as a producer of food shows in New York, and is a James Beard Award winner for her Sushi series. (We gotta brag!) 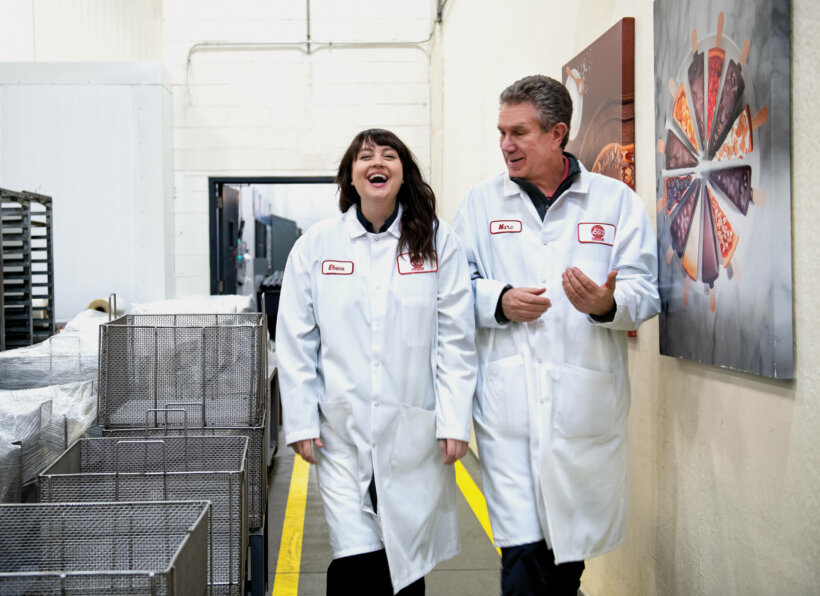 What is Chicago-style cheesecake anyway?

A hot, fast bake and no water bath, results in a golden brown exterior with a rich and creamy interior. Richer and creamier than its New York counterpart, Eli’s has a unique taste and texture and is baked on a real all-butter shortbread cookie crust, instead of a graham one.

Did you know that our cheesecake is baked on top of a giant cookie! Our cookie bakers work through the night, baking off the most delicious, buttery shortbread, which becomes the crust of our cheesecake.

We use cultured fresh cream cheese and cultured sour cream with no fillers, stabilizers, or artificial ingredients.

From frosting layer cakes to swirling cheesecakes and enrobing our Cuties and Dippers, our team of decorators are true artists.

A key technique to baking an Eli’s cheesecake is to start at a very high temperature and then reduce the temperature as the baking process continues.

We use only pure Madagascar Bourbon vanilla extract and vanilla beans from Nielsen-Massey, a family-owned business headquartered in Waukegan, Illinois.

Forget the fork, you’ll need a forklift for these BIG cakes!

Some of our Favorite Moments 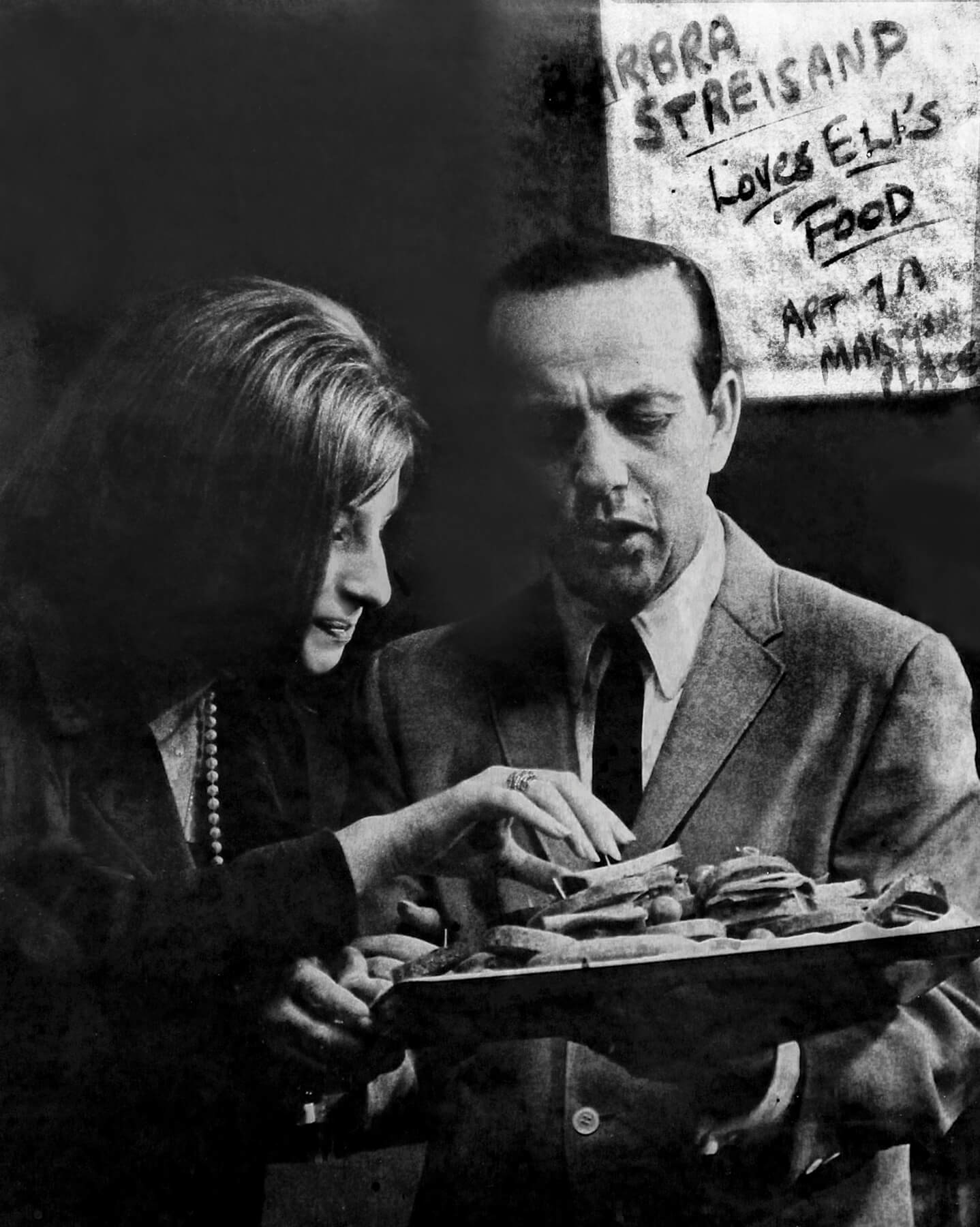 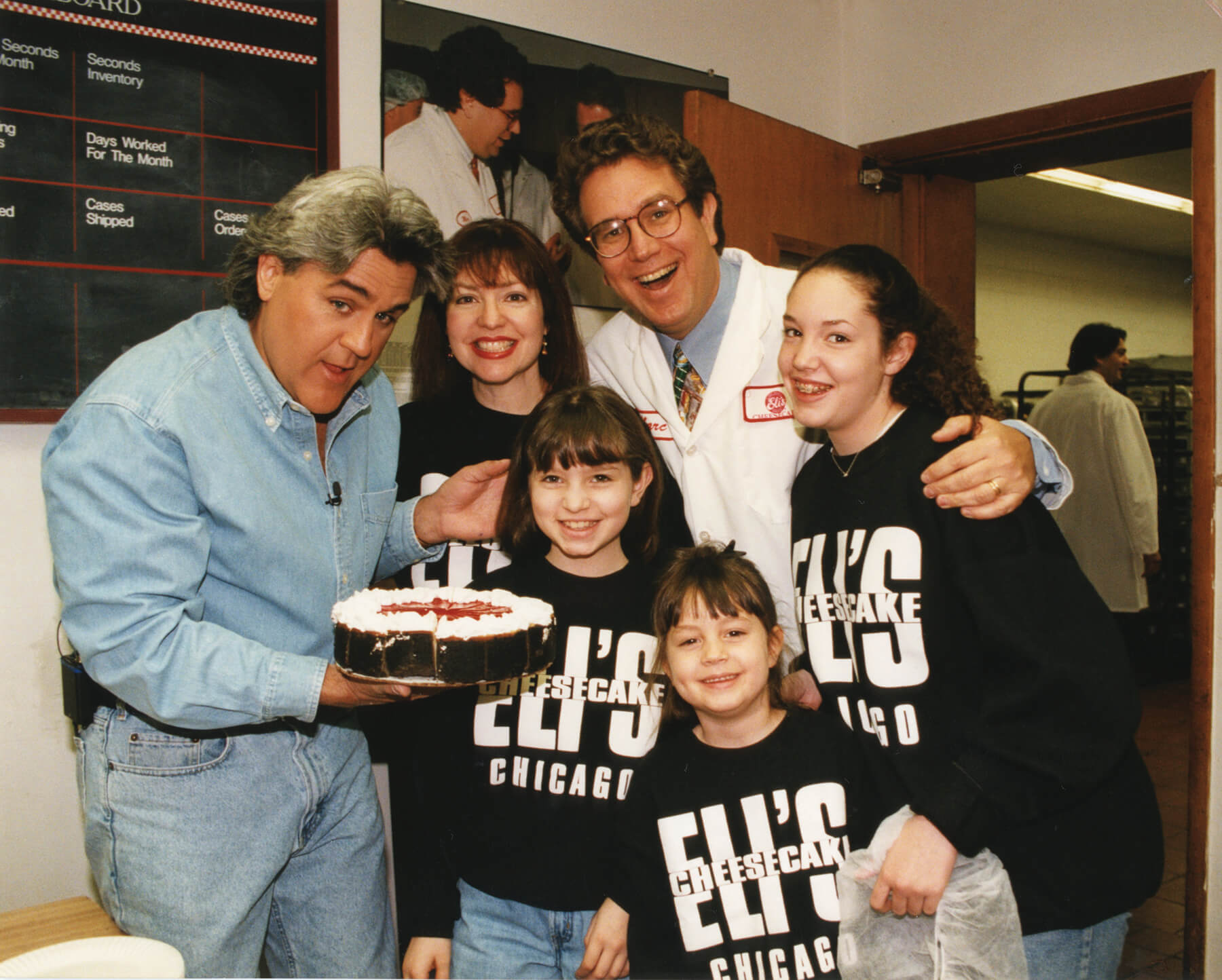 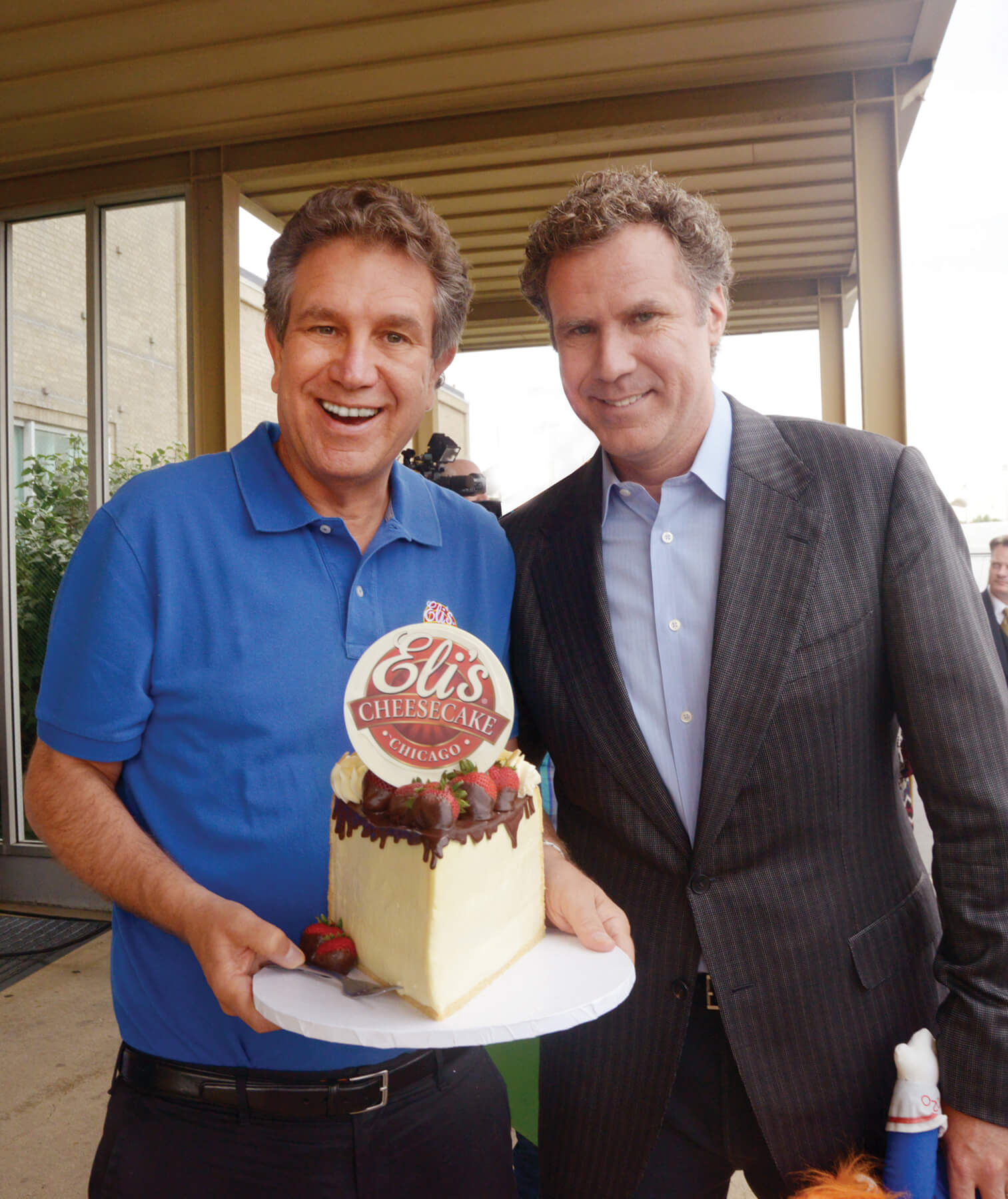